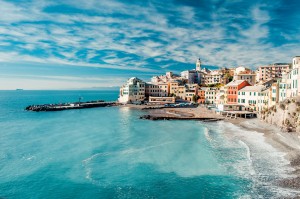 The Isle of Ischia, the largest and considered the most beautiful of the Phlegrean Islands of Italy is located in the Tyrrhenian Sea only around 30 miles from Naples. Roughly 24 square miles in size, the island is one of the most popular tourist destinations in the region for good reason. What the island lacks in size it more than makes up for in history, culture, food and wine and beauty. From its thermal spas and volcanic mud baths to its mountains, vistas, blue skies and lush green surroundings and beautiful natural harbors, come with us as we take a closer look at this beautiful and popular island destination for travel in Italy today.

When visiting the island of Ischia, no trip would be complete without a visit to the 6 communes of the island including Ischia, Casamicciola Terme, Lacco Ameno, Forio, Serrara Fontana and Barano, each offering its own unique experiences and destinations.

Ischia Town is located on the north eastern coast and is the main town. Home to just over 16,000 residents, it is most famous for its ancient baths and the Aragonese Castle. In addition, the area called Ischia Ponte, an ancient fishing village, provides a unique perspective on the island and its past as well.

Casamicciola Terme is a town which is home to just around 7,000 residents and lies on the coast. Divided into hamlets, the main town named Casamicciola or Springs is known for the springs for which it got its name. A number of historic monuments are also found here including the Church of San Gabrile.

Lacco Ameno is home to just over 4,000 residents and is also a coastal town. Located in the northwest part of the island it stretches from the slopes of Mount Epomeo to the sea. This town is most famous for its large rock known as the mushroom, just of the shore, as well as its museums.

Forio is the second most well known and visited town. Home to over 12,000 residents, it is famous for its neighboring vineyards and stunning beaches. Forio is also known as the only town which has preserved its entire historic center including streets, monuments, and towers.

Serrara Fontana is a small town home to only 3,000 inhabitants and is the highest town on the island. Known for its long farming history and tradition, the town remains much as it was long ago. This is the place to be for the best views.

Barano is home to almost 9000 residents and is located on the southwest side of the island. Another area known for its rich history, many of the houses located here are original to its construction. Visitors to this area also remark on the clean air and lush fertile valleys.

Inside and outside of town, the star of this show is the natural world. From the vineyards and orchards to the forests and ancient volcanoes, you will be hard pressed to find any place in the world more beautiful than the Green Isle.

Island Trader Vacations reviews unique destinations, tips and news to help you travel. Travel and be inspired when you travel with us now and for years to come.