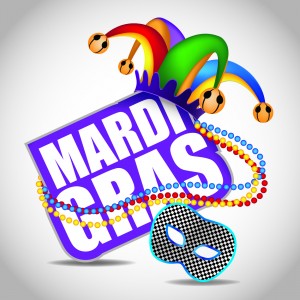 In less than a month begins Mardi Gras 2015! While the actual day of Mardi Gras is celebrated on February 17th, the fun events and activities relating to this popular event begin the week before. This year, the parades and celebrations of Mardi Gras in New Orleans begin on February 6th. Take a closer look at what is going on this year in NOLA during Mardi Gras, one of the year’s most popular and exciting annual events.

By 1781, Carnival was also begun in New Orleans, and the celebration we know it today made its way into history.

Traditional events celebrated during this time of the year include not just the parades but the food , the beads and the masks as well. Even the colors associated with Mardi Gras are based in tradition. Events you can expect to enjoy this year include the parades which start in the French Quarter with the Krewe of Joan of Arc at 6 pm and end with the Krewe of Lyra at 10 am in Covington on February 17th and for those celebrating with family, check out Family Gras on Friday February 6th until Sunday February 8th. This free family celebration takes place at Veterans Memorial Boulevard and includes a number of performances from great musician and entertainers. Past performers have included Wilson Phillips and Montgomery Gentry. A food court will be serving local favorites as well as King Cake for the occasion.

In addition to the parades and the great food and musical events, you may want to check out the popular Mardi Gras related attractions such as Mardi Gras World, the Lousiana State Mseum and The Germaine Cazenave Wells Mardi Gras Museum.

The New Orleans City Council passed new parade rules beginning in 2014 which include:

Get to the parades early as the best spots fill up fast. The Mardi Gras website advises you arrive at least 4 hours in advance for the best spots.

Don’t argue with the police. They have a job to do and a lot of people to deal with. Be respectful and obey all laws and you won’t have any trouble.

All you have to do is ask to get beads! Just yell “throw me something mister”.

Stay out of the street and all floats.

If you have children, go to Family Gras and avoid the French Quarter during Mardi Gras, this IS NOT family friendly.

If you haven’t already booked accommodations, time is running out as hotels and other accommodations fill up fast during this popular festival!